HyperDeck Extreme features the trusted reliability of HyperDeck combined with new innovations such as space saving H.265 files, optional internal cache, 3D LUTs and HDR support. With the ability to record up to 4K in H.265, customers get reduced storage costs and amazing image quality. The large touch screen ensures a perfect view of their recording as well as control over all deck settings. Customers can then add HyperDeck Extreme Control to transform it into a traditional broadcast deck. This means HyperDeck Extreme is the perfect solution for the next generation of broadcast, live production and digital signage.

HyperDeck Extreme has an innovative touch screen user interface with deck controls as well as a large screen to view their recording. HyperDeck Extreme also includes 2 media slots, 12G-SDI, analog connections for archiving, USB-C external disk recording, plus a front panel speaker and headphone jack. There's also an optional cache that eliminates dropped frames if their media becomes full or is too slow. Both AC and DC power connections are also included for studio or on location use.

With its amazing versatility, HyperDeck Extreme is also great for live production as a master recorder, clip player and for recording ISO cameras. The analog inputs allow customers to record from old video tapes, so legacy programming can be used on the latest streaming services or for use in editing. Digital signage is easy with HyperDeck Extreme as it has 10G Ethernet for fast media uploads, plus it features a simple remote control protocol. Customers can even use it as a field recorder as it includes HDMI, SDI and analog inputs with built in scopes and 3D LUTs. The scopes also help customers QA masters to ensure compliance with broadcast standards before streaming and broadcast.

Also at NAB, Blackmagic Design announced the HyperDeck Shuttle HD, a new recorder/player that’s designed for use on the desktop as an on demand media player. This new model supports recording and playback for ProRes, DNx and H.264 files as well as PCM or AAC audio. The unique design is dominated by a large metal search dial and traditional broadcast deck controls, so it's easy to quickly scroll through media. It even has a built in teleprompter! HyperDeck Shuttle uses HDMI connections so it’s the perfect solution for use with ATEM Mini switchers.

HyperDeck Shuttle HD is available immediately from Blackmagic Design resellers worldwide from US$495.

HyperDeck Shuttle HD is a recorder and player that's designed to be used on the desktop. That means it's more than a master recorder as it can also be used as a clip player. The large search dial is perfect for scrolling through lots of media to find the clip customers want to play. Customers get support for ProRes, DNx and H.264 files in NTSC, PAL, 720p and 1080p video formats. The HDMI connections allow connection to switchers, cameras and monitors. Plus SD cards, UHS-II cards and USB-C external disks can be used for recording and playing media. HyperDeck Shuttle HD uses the same design as ATEM Mini Extreme, so it's a perfect combination to use as a media player. It even has a built in teleprompter.

HyperDeck Shuttle HD is perfectly designed for the desktop. This means the front panel can be operated with a single hand. The gentle angle allows their hand to rest on the search dial, and the control buttons are positioned under their fingertips. The design is the same depth and angle as ATEM Mini Extreme, so they match perfectly when used together. That's perfect when users are searching through lots of media. Plus, the buttons are the same design as traditional broadcast decks. The rear panel includes all video, power, network and control connections.

With support for H.264, ProRes and DNx files, customers can record true broadcast masters. Customers can even select between PCM or AAC audio. That's perfect for higher quality mastering when used with ATEM Mini switchers. Customers get everything needed to send shows to broadcasters and for uploading to YouTube. 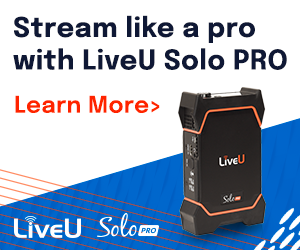